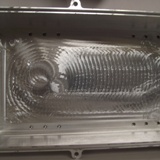 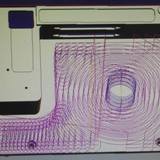 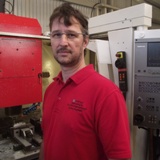 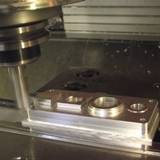 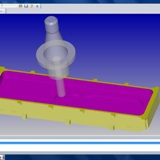 Chris Bentley, Managing Director of Mach One Engineering, says: “It’s exciting when new technology comes along that changes things so much for the better.

"Waveform is real. It does work, and is actually pushing the boundaries of traditional milling."

“We find it a very powerful tool because it enables us to do much deeper depth cuts than before. And because we can also increase feed and speed rates it reduces our cycle times considerably.”

EDGECAM’s waveform roughing strategy has been designed to maximise material removal rates while prolonging both tool and machine tool life. It produces rough milling toolpaths that deliver shorter cycle times, greater tool life, better surface finish and are kinder to machine tools. Waveform creates its toolpaths so that when viewed from above the distance between the roughing passes – also known as stepover – varies, but this variation allows the actual width of cut to stay the same and at the optimum level, meaning the spikes are removed. Chip load stays constant, and the depth of cut employs the cutter’s entire flute length.

It is proving to be invaluable in Mach One’s machining operations for their biggest customer base: the satellite communications industry. Chris Bentley highlights how it reduced the cycle time from two hours five minutes, to one hour 36 minutes, for an aluminium 4G broadcast amplifier casing. “We went from a 4mm depth cut to 15mm using a 25mm indexable insert cutter, and we reduced the stepover from 50 per cent down to 20 per cent.  We’d expect even better results from using solid carbide, because it would give us more flute length. But we can push the indexable insert cutter particularly hard, and we ended up moving from 2.4 metres/min to 4.5 metres/min – just under double the feed rate.”

Other satellite communications equipment that the ISO 9001-accredited company now manufactures with waveform includes a component which houses electronics for a HD television broadcasting unit. “Traditionally we roughed the open pockets with a 16mm cutter making 6mm depth cuts at a feed rate of 1800mm a minute. With waveform we were able to take a 29mm depth cut with a stepover of 20 per cent.”

Although they did not increase the feed rate too much for that particular job – taking it to 2.5 metres/min, the feed rate for another component has more than doubled. An aluminium casing for a person-to-person communication unit is produced with a feed rate of 5.4 metres/min, up from two metres/min. Prior to waveform, the 8mm ripper created a depth cut of 4mm. That has now been increased to a 12mm depth cut using the same tool, with a 20 percent stepover.

With many of EDGECAM’s waveform roughing parameters being outside the traditional machining comfort zone, Mach One’s skilled machinists were unsure originally that the process would work without damaging the tools.

“In some cases we’ve increased the depth cut five times from the depth we used to have. And even though we were reducing from a 50 per cent stepover to 20 per cent, the confidence just isn’t there at first to start pushing the feed rate higher as well. But I’ve put some radical programs in place, and they’ve all worked,” says Chris Bentley. “Your instincts as a skilled miller tell you combining these depths of cut with the amount of stepover and increased feed and speed rates is going to go badly wrong. But it doesn’t. Waveform is real, it does work, and is actually pushing the boundaries of traditional milling.

“The quicker cycle times are increasing our capacity. Quality and service is always our Number One priority, and EDGECAM’s Waveform Roughing Strategy will definitely make a major contribution towards that.”

Having used EDGECAM for five years, Chris Bentley says it is an integral part of their manufacturing process, driving three XYZ mills, a Cincinnati Arrow and Dugard Eagle. He adds that they have shown a number of customers their jobs running with waveform since it was introduced a year ago. “Their normal reaction is ‘Wow,’ with a big smile.”

The 3,500 square foot factory which machines a variety of materials along with providing anodising services, also benefits from an unexpected side-effect of waveform roughing: “It’s noticeably quieter. Everyone likes it because the machines don’t squeal, making it a more comfortable working environment for the machine operators.”

EDGECAM General Manager Raf Lobato says Mach One’s experiences of waveform are typical. “It’s all about gaining the confidence to accept a whole new way of thinking. Because it’s going outside the normal boundaries of what has been achievable and realistic in the past, customers are doing waveform roughing with normal feeds and speeds to begin with, then they start to realise its enormous potential, and ramp up the speed and feed rates. And as Chris says, that plays a major role in increasing profitability.”

"The quicker cycle times are increasing our capacity. Quality and service is always our Number One priority, and EDGECAM's Waveform Roughing Strategy will definitely make a major contribution to that."