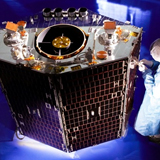 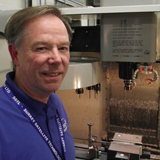 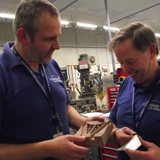 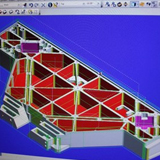 Many satellites orbiting high above the Earth have precision instruments in their payload that were manufactured with EDGECAM CNC programs. They include equipment that guides rescuers to disaster survivors...and keeps drivers’ satnav systems functioning.

The company’s Optical Payload Group, based at Sevenoaks in Kent, uses the market-leading EDGECAM manufacturing software to produce a variety of components for the payload – a payload comprises the equipment which is essential to the success of the space mission.

Applications of the Group’s instruments include satellites monitoring a disaster area. With tsunamis and earthquakes, the geography of the land changes, and it is imperative that rescuers know how to reach survivors quickly.

Senior programmer/operator Bob Pearce (pictured right), who manufacturers a number of optical components for telescopes in disaster satellites, says: “It’s no good rescuers going down a road and discovering that a bridge has been destroyed. Satellite imagery can show them that, straight away, giving them valuable time, which hopefully means they’ll be able to save more lives.”

Manufacturing precision components that are not only extremely complex, but also lightweight and very small, provides a tremendous sense of job satisfaction for Bob Pearce, who says combining the EDGECAM modules of Solid Machinist and Advanced Milling enables him to carry out all the intricate work that he simply would not be able to achieve manually.

And he says there is usually more than one way to do a job. “The system gives me the flexibility to use either Feature Finder or the rough and finishing machine cycles. Also, if a model needs to be altered, I can reload the altered model and it will make the necessary changes to the program.”

Using mainly titanium, space quality aluminium, and invar – a nickel steel alloy which has a uniquely low thermal expansion co-efficient – along with some occasional ceramic and carbon work, he says EDGECAM gives him full confidence that he will be able to produce whatever a customer requires. “When I get a component that’s going to be especially difficult to produce, I have full confidence that I’ll be able to do it, using EDGECAM.


“We’re having to make components that are becoming increasingly more complex. Because we work in the optical field, customers are demanding better and more accurate imagers, which means that our machining has to constantly match that. So far we’ve always a managed to give them what they want, but I’m forecasting that the day will come when the accuracy provided by current technology may not be enough. However, that’s not down to the software – I’m totally confident that programming with EDGECAM will constantly meet the ever growing developments. The limitations will be down to the CNC machines themselves and the levels of accuracy they can work to.”

EDGECAM currently drives their Haas 4-axis milling machine, which uses an average of 10 tools for each job, programmed from a 20-tool carousel (pictured right). But he is becoming increasingly impressed with the software’s extensive programming capabilities for 5-axis machines, which he learns more about from attending the EDGECAM user group upgrade training.

Overseen by Surrey Satellite Technology’s manufacturing manager Geoff Cooper (pictured far left, with Bob Pearce), the size of their components averages around 300 mm, with a thickness of about 50 mm, but they have recently created a ¾ metre platform to go inside a satellite, to house much of the payload. “All our manufacturing is bespoke, and each job is quite different from another, often involving numerous angles, with ‘pockets’ cut out of the metal wherever possible to reduce weight, which is a vital consideration with space applications,” says Geoff Cooper.

The fact that Bob Pearce is both programmer and machine operator pays big dividends. “As a lot of tooling is involved, it’s important for me as a programmer to know what the machine is capable of. Because most of the parts are very small and can be difficult to hold at some stage of the process, I need to be aware of which faces can be machined before moving on to the next. And it’s important for me as an operator to know what programming options are available.”

Before the design office start to draw up a new component they confer with him about the best way of approaching it, then prepare it in SolidWorks. The final design is put in a central database, which Bob Pearce imports into EDGECAM Solid Machinist and then decides if it’s intricate enough to use the cycles, or if it is more straightforward he will use Feature Finder. After selecting the tools for machining the features, the toolpaths are generated, and the program post processed and downloaded to the Haas.

Another feature he finds particularly valuable is the simulator. “Any cutting errors will show up on the simulation, which can be overlaid onto the solid model. This facility also enables me to see where the clamping is and ensure collision avoidance. When I’ve checked the tools at the machine and set datum for the tools and components, and I’m fully convinced, thanks to the simulator, that it’s a collision-free program, I’ll start machining.

“Over the years that I’ve used EDGECAM I’ve become confident that it can do virtually anything I need it to. And so far, it has.”