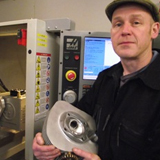 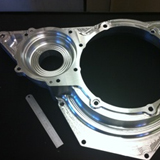 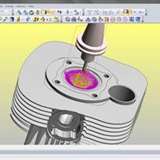 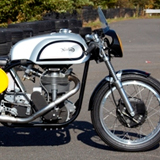 His racing team promotes the engine-building side of the business, as he says the race track is the only place to measure their success. “We design and manufacture historic racing Norton motorcycles, engines and parts aimed at the highest level of classic bike racing. Because we win so many races with our own replica bike – ridden by former World and British Classic Champion Glen English – the motorsport industry knows our engines are superior to those of our competitors.”

Classic racing regulations state that although the bikes and engines are new, they must be exact replicas of the originals, and he makes both 500cc and 350cc versions. But he says the market leading EDGECAM CNC software means he can machine the components and castings to a higher degree of accuracy, giving the engines much more horsepower.

“The combustion chamber in the Norton’s cylinder head is a perfect example of how EDGECAM is helping the industry to develop by making the bikes go faster. Originally the chamber would have been drawn manually around 1957, and a patternmaker would make the pattern with wood using chisels. I created the CAD model for the new engine and sent it to my patternmaker who cut the tooling, and the raw casting has the machining allowances on it. I open the CAD file in EDGECAM, which is associative, so any design changes or other amendments are automatically updated.

“I then use EDGECAM to produce the cutter paths for the roughing, semi-finishing and finishing operations.” When he has the machining sequence he wants, he runs EDGECAM’s on-screen simulation program, which he says is absolutely vital. “I’m machining expensive parts from aluminium, steel and bronze, and even experienced machinists can have the occasional collision, but EDGECAM prevents that.” He then generates the CNC code for the Haas Minimill 2 at his Stratford-Upon-Avon workshop, but still ‘dry-runs’ the job by stop-setting it in the Z to watch the tool run around before machining.

Never having personally undertaken CNC machining until three years ago, he found his original CAM software too complicated. “Even the simple things had to be done in a complicated way, and – as I’d learned G-code – if a part wasn’t too complex I’d write the code in longhand. Then I switched to EDGECAM and found it so easy, especially after the excellent training and support during my learning curve, that I always use it now, whether the part is simple or complex.”

As Norton’s official historic racing partner, his relationship with the company is likely to increase in the coming year as he is now starting to produce the completed bikes – not just the engines – in conjunction with Norton’s new factory at the Donington Park racing circuit. At the moment he sells all 500cc and 350cc parts for a Norton racing engine on his website www.worksracing.co.uk and by the end of the year he will also be manufacturing and selling every part of the chassis as well.

Patrick Walker also provides engine design and manufacturing consultancy for the wider motorsport industry. He recently machined a bell housing made from a 60-kilo billet for a competitor in the British Team Touring Car Championships. “Many people said that was a crazy part to machine from solid – it would normally have been cast. But EDGECAM made it so easy.”

He also used EDGECAM to machine a replica top yoke from solid for a Matchless G45 racing motorcycle. “My customer had an extremely valuable bike, but without a top yoke. He borrowed a yoke, I modelled it, then machined a few from solid.  EDGECAM gives me the ability to machine parts like this from solid instead of having them cast.”

His first job in motorsport was working at Norton alongside the legendary pioneering motor cycle engineer Doug Hele. “This is ironic,” he says, “because Doug undertook the final development of the original engine that I now make.”  Patrick Walker was also involved in developing engines for supercars such as the Jaguar XJ220 and Aston Martin DB7, and a number of other racing engine programmes, before setting up his own engine development company, Maxsym Engine Technology, in 1994, and taking the decision to start Works Racing Motorcycles Ltd during the Goodwood Revival in 2008.

“Many of my competitors don’t use CAM – they use manual CNC machines, and it’s not possible to produce something like my combustion chamber without EDGECAM. This is a complicated 3D shape which couldn’t be programmed by hand. The traditional method of making it would be to turn it on a lathe, but that is limiting because you can only produce a circular profile. With EDGECAM I can increase the horsepower, meaning my USP is that my engines are significantly faster and win more races.”